How we managed to close a 140,000 USD enterprise deal without a single meeting or dedicated Sales team

Most people you meet will have you believe that you need an expensive sales team to close large enterprise deals. In this blog, we talk about our experience and tips on what you need to do in order to create a lean but effective sales process!

Despite being from a Tier-Two city, we travel frequently, and over the last few years have often interacted with other founders, investors, and key stakeholders.

One of the things we keep hearing is  ‘If you want to create a large company, move to a major city’, or ‘You need to hire specialist sales folks in the US/ Europe to close enterprise deals’.

While this is probably good advice for companies that have crossed 20 mn in ARR, we feel smaller companies (5 – 10 mn) do not need to take this as words set in stone. The sales process is as important as the sales team. And relationships can be created over the phone. But I am getting ahead of myself.

Let’s go back in time to when this story started.

While we are calling this our first enterprise deal, that is not strictly accurate. We have been able to source and close numerous deals in the 10-30k usd bracket. However we never focused on 100k+ deals. Until now.

It was a day like any other in late July last year. I came to office and I noticed a ‘Callback’ request in my inbox. These requests generally go to the support team, but I get a copy in my Inbox.

I noticed the client’s email ID and immediately realized that this was one of the biggest corporations in Europe.

I told the team that I would contact them myself. Someone from the team had already tried to call them but had not been able to connect.

Time for the first lesson.

You need to pick your battles. And this was a big one!

I sent the following email and didn’t hear back.

Sent a follow-up email a few days later and got a reply the second time round. This is fairly normal in enterprise sales, and you need to be sure you follow up (politely) at least 5-7 times. Mixing a few calls with emails normally works best. Hubspot CRM is a great tool to help stay on top of your sales pipeline.

And this leads to next lesson...

Lesson 2: Do not give up! Not easily. Not in sales.

Off the 150+ emails that I sent, there must have been at least 10 that received no response, and required a followup.

Now that the conversation had started, we did the customary product demos. I was now in regular touch with their lead manager. We soon exchanged phone numbers and had spoken a few times on the phone.

A basic comfort between us had started to develop.

By end of August, we knew that there was significant interest. We got the following email, and we had to prepare a quote. The game was on! 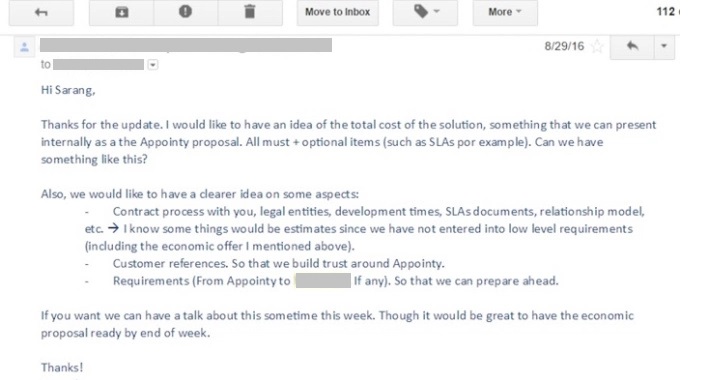 It was time to share the opportunity internally. Now who can resist such an opportunity??

While we can not disclose our initial quote and structure, rest assured it was about 50% of where the deal closed eventually. We underbid/ undervalued ourselves, and we only realized that in retrospect. From there it was always an uphill task to convince the client why our initial quote was lower. It was one of the worst things we could have done.

Time for another lesson…

Lesson 3 – Do not undersell in enterprise sales.

Most large companies are indifferent between 100k and 250k. In fact, a low quote sometimes creates doubts on ability/ understanding of the scope of the project. 20-30% lower than competition is good. 50% lower creates doubts on quality!

So we had made a low quote and were trying to bid for a project that was larger than anything we had ever closed before. Plus we had never worked on the technology that the client wanted. Things did not look good.

But here is where it gets interesting!

During this time, I had managed to create a good relationship with the lead manager. We had even progressed from phone numbers to WhatsApp/ Skype. During numerous conversations that we had, I realized that he was our internal champion, and he believed in us.

However, there were other key stakeholders that we had never met, and who had serious doubts. He clearly told me that he only had about 35% say in the matter.

There were members within the client that had doubts about our ability to build (within 3 months) a scheduling product that worked with CISCO APIs.

It was a chicken and egg situation. We could not show them what we could do until we got the project. And we would not get the project till we could convince them about what we could do. They were also concerned about coordination with a non-European team given the geographical separation. All valid concerns.

Before we move on to how we solved this situation, I think it’s time for the next and most important lesson.

Having an internal champion helped us immensely. This was the only reason we could understand their concerns, and propose a solution. This perhaps was the single most important reason for us winning the project.

I quickly made a decision. I wrote an email to the client saying that we would

Our team was able to create a working demo in 1 day. Yes, ONE day. By the fifth, we had even polished up the UI/ UX. Our interns rocked it again!

Nemesh has already talked about our success in redesigning Appointy from scratch using the same team.

Needless to say, they were impressed with what we were able to achieve in 5 days. And we were given the go-ahead to participate in the RFP.

By now we were in November. 4 months had passed…

We were closer than ever.

In fact, our client liked the demo to such an extent that the finance team negotiating the financials actually confessed that they had been told that we were the first preference. Things now got much easier.

We concluded commercial discussions/ bidding and by early December, we had won the contract.

By mid-December, we were in Europe for the kick off meetings.

I’d like to leave you with just one last thought. Let’s call it another lesson.

Lesson 5: The importance of the tech team/ product in the sales cycle.

The only reason we went to the top of the pile during the competitive period was our absolutely stellar ‘overnight’ demo (Again made by an intern).

Even today, the quality of the work has impressed the client to such an extent that they have offered to pay 100% in advance (contractual commitment was 30%).

This makes future sales opportunities with them much easier, as well as references. Now that’s sustainable sales. 🙂

I hope you found this blog and these suggestions useful. Please do let us know your thoughts in the comment box.

DON’T MISS OUT!
Subscribe To Newsletter
Be the first to get latest updates and exclusive content straight to your email inbox.
Give it a try, you can unsubscribe anytime.

We use cookies to ensure that we give you the best experience on our website. If you continue to use this site we will assume that you are happy with it.Ok